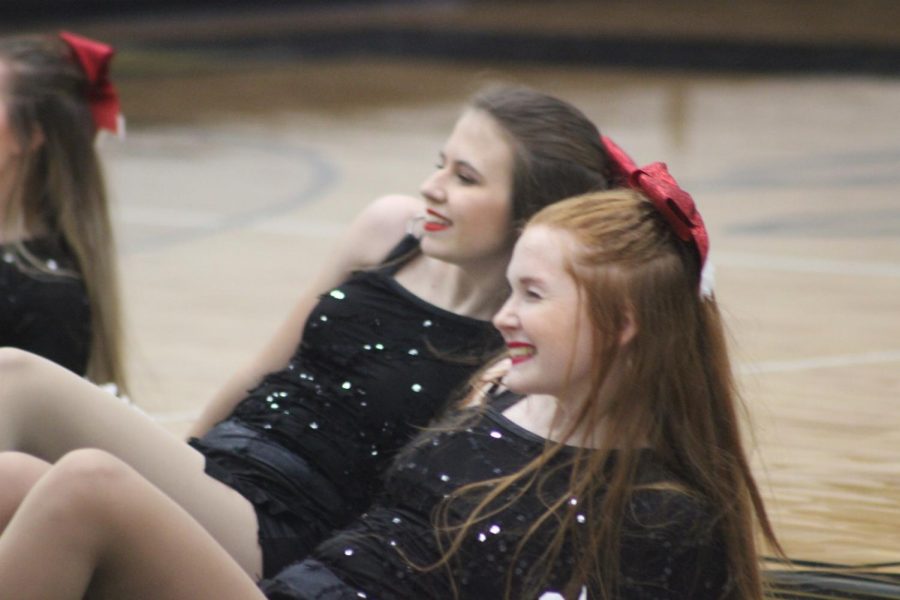 Layni Kinkead and Stella Steck carefully go through the motions of their 2019 Christmas dance to the song "Underneath the Tree" while maintaining perfect facial expressions.

The twenty ninenteen-twenty twenty Gold Dusters have a lot going on this season. They have already performed four dances and have four brand new dances on the way to soon be performed in the upcoming semester. Some of the girls have choreographed their very own dances already. For example, Paxton Clark choreographed a dance that the girls call “the mix” since it is compiled of several songs. They practice several times a week, depending on what their coach thinks is needed. The average amount of practices that the girls participate in weekly is around three. It usually takes around two weeks to learn a dance, depending on how long and how complicated the particular dance is.

Paxton Clark was interviewed on what her opinion was of the dances and her team. She stated that her favorite dance so far was “Go Girl.” She also said that the most difficult dance to learn and the dance that took the most time and effort to learn was the dance they performed at homecoming. Paxton’s favorite dance outfit is the outfit they wear for their Christmas dance.

She was asked whether she likes the team now that it is smaller or if she preferred the larger team, and she said that the connection is better with the smaller team. It’s easier to get close with her teammates, but more can be done in the dances when the team is a larger size.

The girls are very excited for their upcoming performance in February. Last year, the dance teams were ranked by first, second, and third place. Of the three dances they performed, they got second and third place on two of them. However, some girls think that it got confusing to be ranked that way. This year they will be ranked by terms like “superior” and “excellent.” Hopefully it goes well this time around. Good luck, ladies!