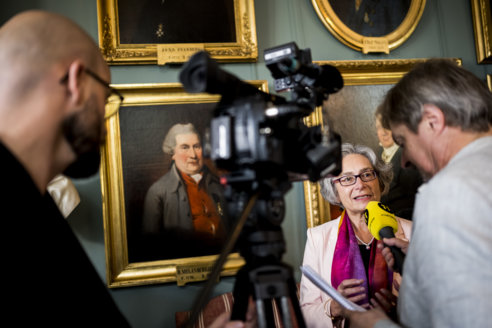 Olga Botner interviewed at a press conference at the Royal Swedish Academy of Sciences.

A Nobel Prize is the creme of the crop for many scientific and social innovations. The award has existed for over 100 years, the first being given in 1901 on the anniversary of Alfred Nobel’s death. Today we have five established categories: Physics, Chemistry, Physiology/Medicine, Literature, and Peace.  The prizes are open to all, irrespective of influence, nationality, race, creed, or ideology. It doesn’t matter where you’re from or what you believe, it’s simply your work that is important. These contributions can lead to a revolution in the category’s field and further the understanding of the subject.  They help shed light on global issues and help us understand the world around us. All of these prizes are equally important and beneficial, but these are the ones that stand out the most this year.
Physics
This year’s physics award goes to three laureates—noble prize winners—for their discovery of the most exotic phenomenon in our universe, the black hole. What is a black hole, you may question? A black hole is a region where gravity is so compact that nothing can escape, even light. Pioneered by Roger Penrose in 1965, this idea of a black hole was further proven by astronomers Reinhard Genzel and Andrea Ghez. Stretching the limits of technology, the two scientists used the world’s largest telescopes to peer through the interstellar debris and distortion to view the heart of the Milky Way. This discovery has set in motion the study of supermassive objects and how it deals with the general theory of relativity. It helps us explain and set in stone the theory of gravity, how our galaxy was formed, and how we’re living in it.


Chemistry
Gene technology is often a controversial topic. Ethical and moral debates ensue, but it can help us find out about life’s inner workings. Emmanuelle Charpentier and Jennifer A. Doudna have designed one of the medical world’s most important tools, the CRISPR/Cas9 genetic scissors. Using these, researchers can change the DNA of animals, plants and microorganisms with extremely high precision. This allows for a breakthrough for disease prevention due to the scissor’s ability to cut bacteria/virus DNA.
Physiology/Medicine
Hepatitis is a dangerous viral infection killing more than 325 million people—roughly 4% of the world’s population—each year. Harvey J. Alter, Michael Houghton and Charles M. Rice have recently identified another blood-born strain of the virus, Hepatitis C. This discovery has revealed the cause of the remaining cases of chronic hepatitis and made possible blood tests and new medicines that can save millions of lives.
Peace
The most renowned of all the Nobel Prizes can be considered the Peace Prize. The 2020 award goes to the World Food Programme (WFP). The World Food Programme is the world’s largest humanitarian organisation fighting hunger and promoting food security to impoverished countries or groups. The progamme helps countries stricken by war or environmental conditions but this year’s Covid-19 outbreak has contributed to the surge of hunger victims worldwide. Besides assisting with the global hunger crisis, they work politically to promote peace and to insure food security.
Delete Image
Align Left
Align Center
Align Right
Align Left
Align Center
Delete Heading