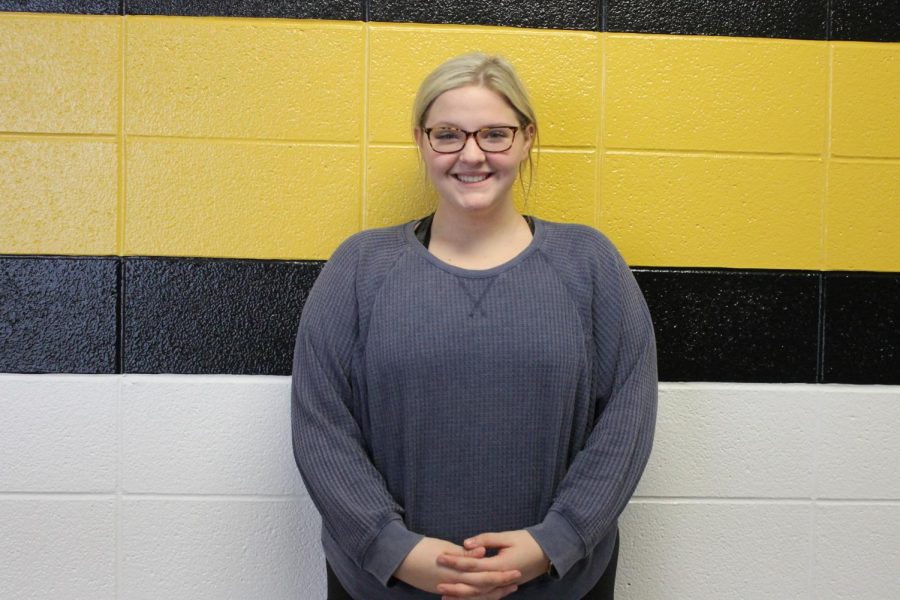 The senior students had to come up with a definition essay and explain why they chose that word and the meaning of the word that they had chosen. One student in particular had an essay that stuck out the most. Her name is Emma Revelle. She felt inspired to write about the word “gossip” and its meanings, both denotativly and connotatively. Below is her essay.

The Wags of Tongues
“Gossip is the devil’s telephone. Best to just hang up” -Moira Rose, Schitt’s Creek
1.
We all do it. It is almost an instinct: the chatter we hear as we walk down the hallways, the buzz in a restaurant as we walk to our seats, the conversation around office water coolers. There are pages made online, and websites are dedicated to it. It is so normal that it courses through our veins. “Did you hear this?” “She said that.” Phrases like these are constant on a roller coaster that never slows down.
2.
As children, we are told to not talk of others in such ways. Meanwhile,  we watch those who tell us this turn their backs and do it themselves. What did they expect us to think? Children watch every move their teachers make. What may seem to be harmless and innocent could just as easily turn harmful and intentionally hurtful. We are told to speak only kind things of others, to not be mean. Girls especially are seen as busybodies or nosy, but boys do it too. They talk just as much as girls. They spill unconfirmed facts out of their mouths too, but they are rarely called out for it.
3.
We see this in our small towns. The women sit in beauty parlors and talk about known people around their town. The men sit in restaurants, sip their coffees, and ‘catch up.’ Then they go to church on Sunday and read passages out of a book that considers their words sin. However, they do not see themselves in that way. They see themselves as informants and “do-gooders.” They are the people you seek out to discover what is really going on in that county. As a child of this type of life, I see it. We thrive off of it. Whether we do it out of boredom, for self-confidence (or the lack thereof,) or because we do not know better, I do not know. I do not know the truth. I do not think anyone does.
4.
We see this on a national level. In our country, we see people gather around tables, talking of celebrities, politicians, and public figures. Reporters interview these people, coercing them into talking badly of others. Feuds in our country fuel fires. They call it news; however, it is doubtful anyone would cite them in any essay or paper. The conversation and exchanges become biased and hypocritical viewings for their audiences. They sit and berate people for saying or speaking of someone while they sit around their tables and do just that. The difference between these people and the people they are ‘reporting’ is the fact that they are on national television.
5.
There are some who hide behind screens or a pen and paper. They print and upload falsehoods, blatant lies, give themselves the name “author” or “reporter,” and cash a paycheck for it. If the ones they write about grow angry enough, the “reporter” sometimes retracts and restates, but there will still be people who remember the first print. The tabloids that we see as we stand in the line at the grocery stores are notoriously spreading untruths.  The  Us weekly and the Soap Opera Digests are rarely purchased. They are the ones we read and rush to put back on the stand before people see us flipping through. They say just enough to make you wonder if it is true or not.
6.
Our presidents, senators, and representatives do it. However, we do not see it like that. How could we? These are the people that we should trust with their words. Wrong. They are human too, and it courses through their veins and lips just the same as us. It leaves us questioning what side to believe, leaves us questioning if the side we are affiliated with is the correct side. It does not help anyone out.
7.
Social media is a breeding ground for it: the stories, the snaps, the tweets. They all fill our minds with rumors, conspiracies, and details. Like every other part of our lives, we choose what we want to believe. If we do not like something, someone, someplace. Why not talk about it, for all of our followers to see and read. Why not confuse everyone else around us too? “It is normal for people to talk about this.” “They posted what they saw, why shouldn’t I?” Young people hurt each other. They post videos and demeaning and cryptic messages about their peers. They use these platforms to spread their secrets and insecurities. It is not always as it seems.
8.
I do not say these words to make myself seem greater or better than others. I am guilty too. My mouth runs all of the time. If it were an Olympic event, I would have many gold medals. My words have hurt others’ feelings, and theirs have mine. I am terrible about it in some aspects. I should give it a rest. I should look to people who do not speak of others in such ways, but where are they?  My point is proven. There are so many people here on this rock spinning around and so many people in this free land we live in. We all do it. We all hear it, and we do not stop it. It is something that will not go away. Because if it did, imagine how many jobs would be lost, how many people would be bored, but how much happier we all would be?

There are songs written on this topic, from Marvin Gaye’s Heard It Through the Grapevine to Adele’s Rumor Has It.
9.
I am sure that everyone will explain it in a different way. They will give it some definition that makes it seem not as bad. The dictionary explains it as “casual or unconstrained conversation or reports about other people, typically involving details that are not confirmed as being true.” The most commonly used verb or noun. It has two syllables. It is six letters. It is one word. It crumbles mountains. It destroys nations. Gossip.