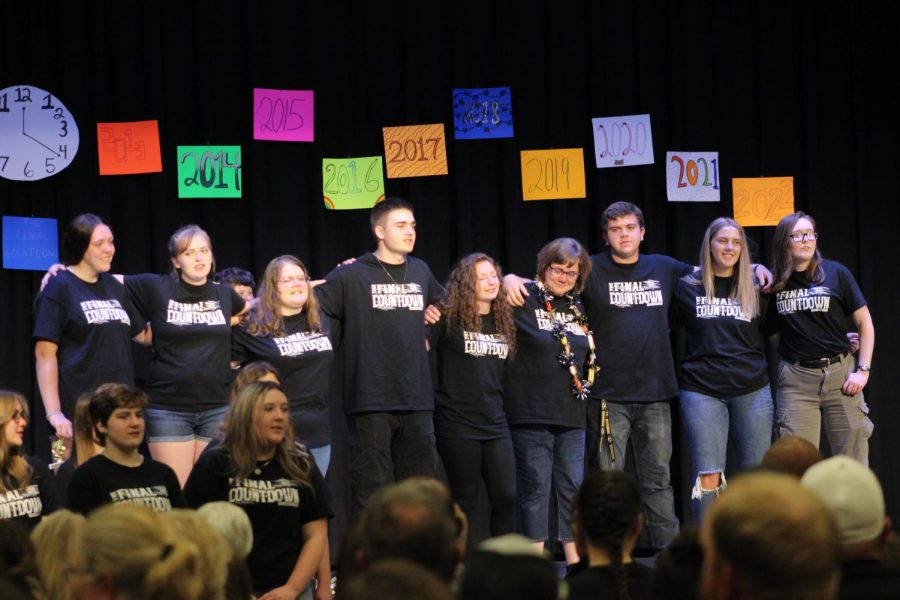 The seniors are all in a line next to Mrs. Lewis who is now retiring this year.

Pop Concert was a splendid night for everyone who was there to watch their children perform for them. Mrs. Lewis had worked hard to get her students to put on the best and last pop concert that she was responsible for. She loved her students very much and she found it hard to leave that night without crying after what everyone has done for her, by bringing her gifts like flowers, and poster boards every time they were at a choir event. She had a big surprise at the end when she got a video message from some of her students from past years saying how grateful they are for Mrs. Lewis’ time as their teacher.

All the solos that got the chance to perform had a moment to shine by singing their favorite songs for the audience. First up to perform was junior, Ania McLaughlin, who sang “When I Was Your Man,” by Bruno Mars. She left the audience speechless with how wonderful she sang.  Seth Williams, a senior, sang the song “How Far I’ll Go,” from the movie Moana for the little kids and had many of the kids singing with him to make the night even more fun for the audience. Kaitlynn Sandman, another junior sang the song “Deep End,” by Foushee even though she was nervous she gained the courage to go up on stage and continue to sing the song that she chose. Nevaya Whitener (10) sang “Dandelions,” she did get really nervous but she kept going because she knew she had a supportive group of friends that were cheering her on from the sides and a supportive team out in the audience. Kaitlyn Mass (11) performed the song “Zombie,” by The Cranberries. She put on an amazing show for everyone with her outstanding voice and how wonderfully she sang the song. The final person for the solos was Alyssa Sample and she performed “Tremble,” by Mosaic MSC. She performed this song because she felt like she needed to sing it, but also because they sing this song a lot at her church. Her voice made it all the more powerful because of how high her vocal range can go and how long she can hold certain notes. All of the solos put on one heck of a show for everyone and the crowd enjoyed singing along with all the students.

Both Mixed Choir and Concert Choir had their own song that they performed as a class. Concert choir sang “Never Ending Story,” by Liamhl and this choir group made sure that you could hear every part that was being sung into the microphones. They were as loud as they could be without making it to loud that you couldn’t hear the music. Mixed choir sang ” Only Hope,” by Mandy Moore, this group of singers did their best to make sure that the song they were singing was as good as can be. Both choir groups sang beautifully and well heard that you can hear their voices if you were sitting in the back of the audience.

That night was one night that none of the students will forget about. Now when they go to do pop concert next year, they will have a new choir teacher to help them pick out the songs that they will be doing and pick out the shirts that they will be wearing for the night of the performance. Every student in the building that was performing was in tears by the time people were handing out the gifts that they got for Mrs. Lewis and when it was time to sing their last song of the night they were finding it hard to sing and cry at the same time. Everyone that was there can say this was The Final Countdown for the year of Mrs. Lewis.